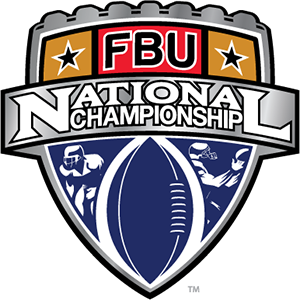 We will be hosting a series of 1-day tryouts for the 2022 FBU Team DC Metro. These tryouts will span the months of May-August and are open to players who will be 6th, 7th, and 8th graders in the Fall of 2022. The Tryouts are open to all positions (QB, RB/FB, WR, TE, OL/DL, LB, DB, K, P) and will consist of a Laser timed 40 yard-dash, position specific drills, and 1 on 1 competition. Players will be evaluated during tryouts and if invited to play on the team will compete for the 2022 FBU National Championship in November-December of 2022.
​
The FBU National Championship is a highly competitive all-star tournament comprised of the best athletes in the country. The FBU National Championship tournament celebrates and promotes youth football through uniting all-star athletes of all backgrounds from across the United States in a true, one-of-a-kind national tournament. The only national football tournament of its kind, the annual FBU National Championship crowns a national champion from brackets in grades 6th, 7th, and 8th. FBU has a partnership with NBC Sports helping to scout players for the National Combine and the All-American Bowl on NBC. Many former FBU players have also been selected to play in the All-American Bowl for their respective classes. Many Division-1 college football athletes and Current NFL players such as Trevor Lawrence (Jaguars), Davis Mills (Texans) , James Cook (Bills), Dyami Brown (Commanders) ,Kayvon Thibodeaux (Giants), and many more have competed in the FBU National Tournament.
Registration begins at 9:00am
Tryouts begin at 10:00am
Sunday, August 21st; Sunday, September 18th; Sunday, October 9th
6th-8th Graders
South County High School; 8501 Silverbrook Rd, Lorton, VA 22079
QB, RB/FB, WR, TE, OL/DL, LB, DB, K, P
$50

If you have any questions please email us at football@perfect-performancenova.com
Tryout Registration